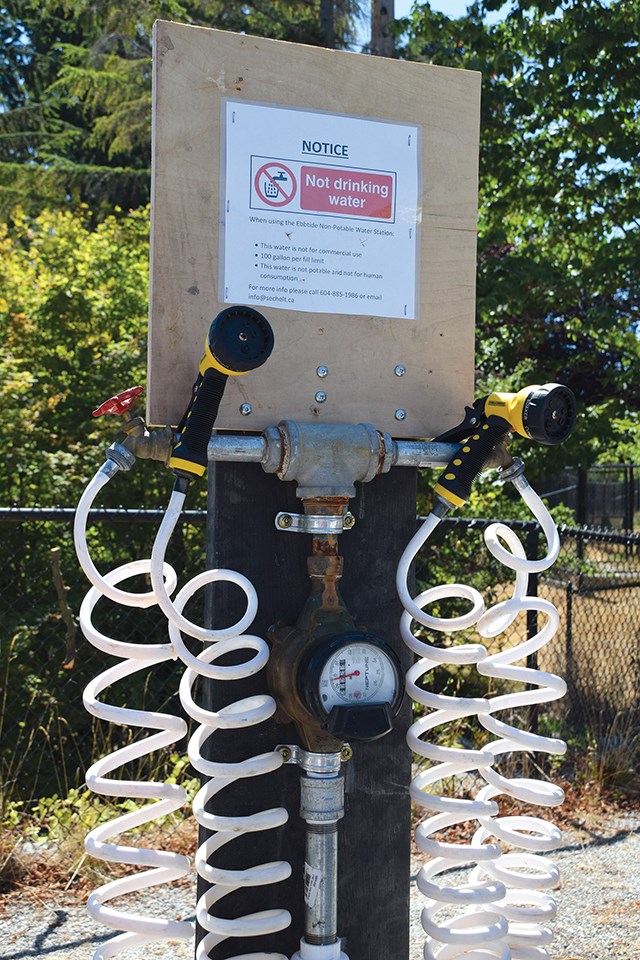 Sechelt’s non-potable water filling station reopened to the public on July 30. The station, near the south end of the Water Resource Center (WRC) at 5678 Surf Circle, has been relocated from the site established in 2015 to allow public access to appropriate water for gardens and landscaping plants during water use restrictions.

In a press release, the district said the resort’s water is safe for plants or for exterior cleaning, but not for human consumption or swimming. Sechelt states that the source should not be used for commercial purposes or for washing equipment or vehicles. To avoid queues at the site, he asks users to fill only “a few buckets at a time,” as the station’s feed rate is about the same as an average household faucet.

Mayor Darnelda Siegers said in the statement: “I am delighted that we are able to offer this service to our citizens again this year. The new location of the tap should help improve its accessibility.

According to its website, the municipality removed the public access service station from its original location on Ebbtide Street in mid-2019. He is redeveloping this site into an off-leash dog park.

The site built in 2015 also cost around $ 500. Sechelt reopened it in the following summers when the Stage 4 watering restrictions came into effect. This year, the Sunshine Coast Regional District’s Chapman Creek Water System (SCRD), which supplies most area residents, remained under Stage 3 restrictions while public access was restored.

Sechelt uses the same water source to maintain its downtown hanging flower baskets and for other outdoor park uses. The water at the site is also accessible for non-drinking uses at the WRC.

Meghan Lee, director of development and sustainability engineering at Sechelt, told Coast Reporter that the WRC started using groundwater to augment process water in mid-April of this year. “This translated into an average monthly saving in drinking water use of 36% compared to the same period last year. Since the well was commissioned, more than 2,800 cubic meters of SCRD water have been saved.

The design of the WRC, which opened in 2014, was presented by the council at the time as one that would recover non-potable water from incoming effluents to meet demands on the site and elsewhere in the community. Although there has been use of reclaimed water at the facility, Sechelt has not moved forward with plans to distribute reclaimed water off-site.